You are here: Home / Parenting / 3 Simple Steps to Stop the Whining

I am convinced that at some point in a child’s life, they ALL go through a whining phase.  Somewhere around 3 or 4 they start whining, and they do it for everything.  Maybe it’s just my children (please tell me it’s not!), but each of them have done this – some still do on occasion- and  now it is the youngest’s turn to go through the phase.  It doesn’t matter what it is that she’s asking for, she always goes right to the dreadful whine!  So what do we do to stop the whining, before it gets out of control?  Well at our house we use 3 simple steps to stop the whining. 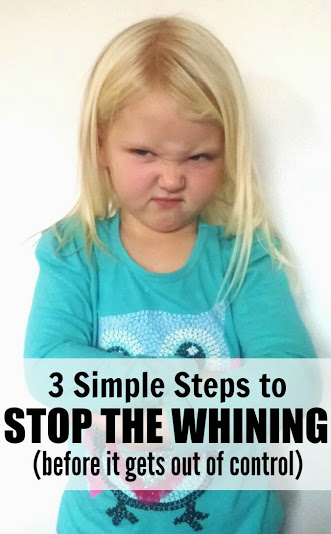 3 Simple Steps to Stop the Whining

Nothing drives me crazier than a child that is whining.  It is like nails on a chalkboard, so when my 4 yr old recently started with it, I knew we needed to put a stop to it immediately, before it gets out of control.  Aside from taking immediate action and being consistent, every time she does it,  there are 3 simple steps that I used with my other children at this age and I’ll now use those steps with her.   Which brings me to my first step:  STOP.

Step 1: STOP – the first step to stop the whining is to do just that.  The second it starts in, let them know it’s not ok.  From my experiences, the longer they do it, the more of a habit it becomes.  So when she begins to whine for something I first say “stop”.

When children start in with the whining phase I have noticed that most of the time they don’t even realize that they are doing it.  They are working out all sorts of different communication skills and somewhere along the lines the whining begins.  Maybe it’s heard from other children, maybe it’s just a natural reaction to frustrations, but either way they need be told that they are whining so they can realize it later on. This is the second step: Correct.

Step 2: CORRECT – after stopping the child at the first start of whining, let them know what they are doing.  The first few times they need to be instructed not only that they ARE whining but told that whining isn’t how we get what we want, that when asking for something you need to be polite and respectful.  After explaining the proper way to ask for things or to communicate you can shorten it to a simple “stop, you’re whinging”.

Now that they know that they are whining and they have been corrected and told how to properly communicate without whining, you can give them an opportunity to try again.  This is the third step.

Step 3:  TRY AGAIN – this is when I give my children the opportunity to try again with a more appropriate tone and use of their words.

As the whining in my house usually presents it self in the form of asking for something i.e. “Mooooooom, I waaaaaaant Miiiiiilk” I let them know they need to try again and the correct response is “may I please have a glass of milk?”.   When the whining begins I simply start in with the 3 steps:  STOP, CORRECT, TRY AGAIN and say “Stop, You’re whining, Please try again”.  It’s really incredible how once they realize that they are speaking that way they will almost always begin speaking normally.  Nine times out of ten when I go through the three steps I will get the correct response from them almost immediately and it’s a HUGE difference.  I am more than happy to get something for a child when asked politely.

Please tell me I’m not alone here….Your kids whine too, right?!  Do you have any tips to share?

If you’re still looking for more check out this article from Idealist Mom with 7 ways to stop the whining!