If there’s one thing I’ve learned in raising children it is that they can be quite stubborn.  Especially when it comes to what they eat.  When my son was about 2 I think he lived off of milk and crackers.  He refused to eat so many food items, and continued to be a picky eater for several years.  Instead of inciting a battle at dinner each night we came up with a unique plan to encourage him to try new foods using several of the senses.  Yes, there is more to food than just taste! 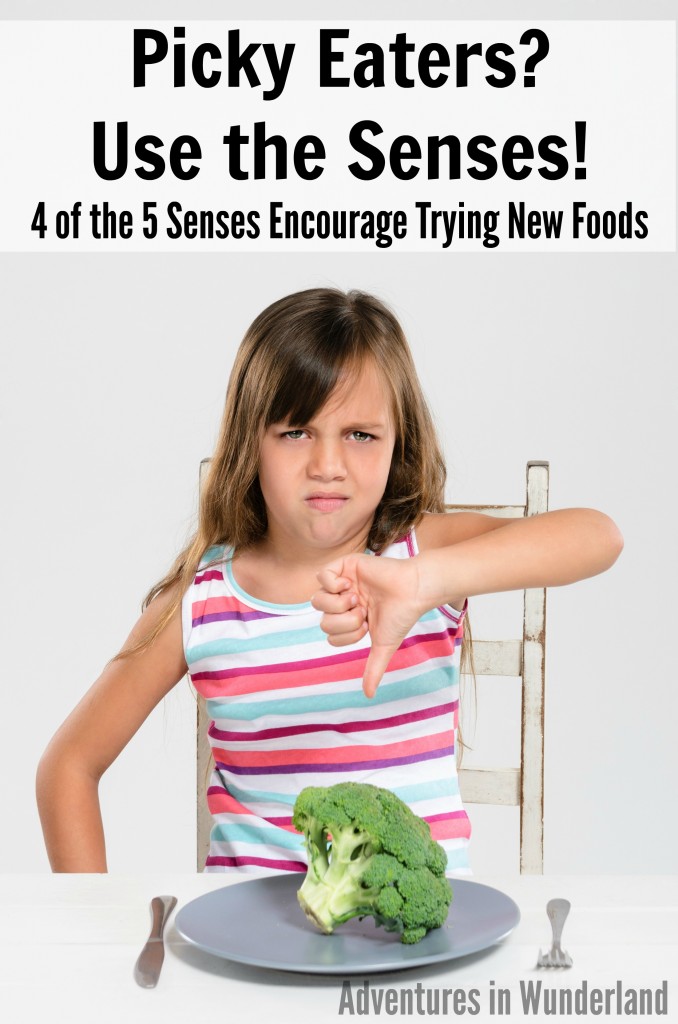 Now that my son is almost 7 yrs old, I am happy to report that he will eat {almost} anything.  One of the pickiest eaters ever, will now eat most fruits and vegetables and will even eat FISH when served for dinner.  I’ve seen him gobble up sushi on occasion, also!

So how did we go from refusing anything but milk and crackers to eating just about any dinner placed in front of him?  We started using several of the senses to encourage him to try something new.  Instead of demanding or forcing him to put a piece of food into his mouth, we started with one of the senses and worked our way up, from sight to taste.

Most children will not try something that is unfamiliar to them so our goal was to familiarize our child with all the aspects of he new food.

Here’s how you can use four of the five major senses to encourage picky eaters to try new foods:

1.  SIGHT:  Ask your child to look at the food.  Have them describe what it looks like, the color, any unique characteristics, does it look hard or squishy.

2. TOUCH: Once they’ve described what it looks like, have them touch the new food.  Yes, I know this totally goes against “don’t play with your food”, but my goal is to make the child comfortable with something that is new.  They can feel the texture and describe it.

3.  SMELL: Now that they’e become familiar with what it looks and feels like, ask the child to smell the food.  At this point, the new food is becoming less foreign and by smelling it they are getting even more of glimpse into what it might taste like, especially since the sense of smell and taste are so closely intertwined.

4.  TASTE:  Now, before you ask the child to put a bite in his mouth, just ask them to lick it.  Often a child will be willing to lick the food rather than put a whole piece in their mouth.  It may sound kind of barbaric but again, the goal is to make the food less foreign to them so that they will eventually warm up to the idea of eating it.  Some kids might just go for it and try a piece, and that’s great! If not, don’t worry.  It may take a few times before they will go ahead and eat the new food.

We often found that with a brand new food we may only get to step #2 or 3, and that’s ok.  Usually the next time you serve that food, they might move up to to #4 and eventually eat the food with out hesitation! 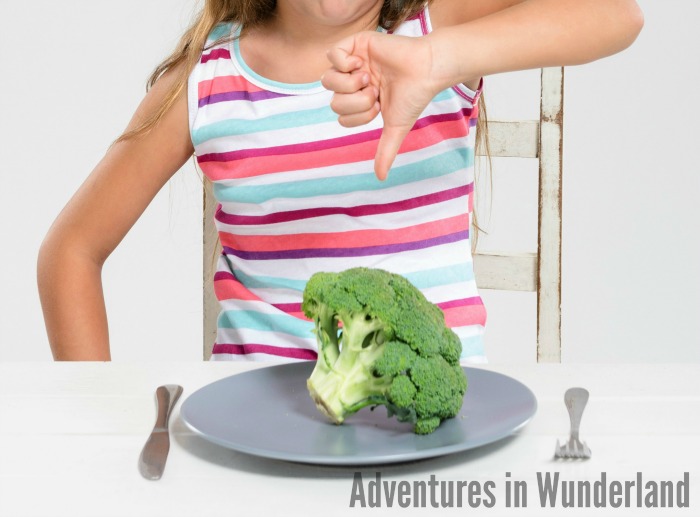