You are here: Home / Health & Fitness / Ear Infection Symptoms that have Nothing to do with Ear Pain

Wondering about ear infection symptoms when your child can’t tell you they have ear pain? This is a great resource.

Several of my children have had chronic ear infections in their early years.   Two of them had recurring ear infections so bad that they had tubes placed as young as 15 months old and one of them had their adenoids removed as well.

So many times I was up all night with a feverish, screaming child. Pain relievers would only do so much and the only way they seemed to be able to settle down at all was upright, while I held them. They wouldn’t take a bottle, they wouldn’t eat anything. And the worst part, they couldn’t just tell me that they had ear pain!

Then I learned pretty quickly the symptoms of an ear infection in baby and started to pay attention when they were sick or having a very restless night of sleep. 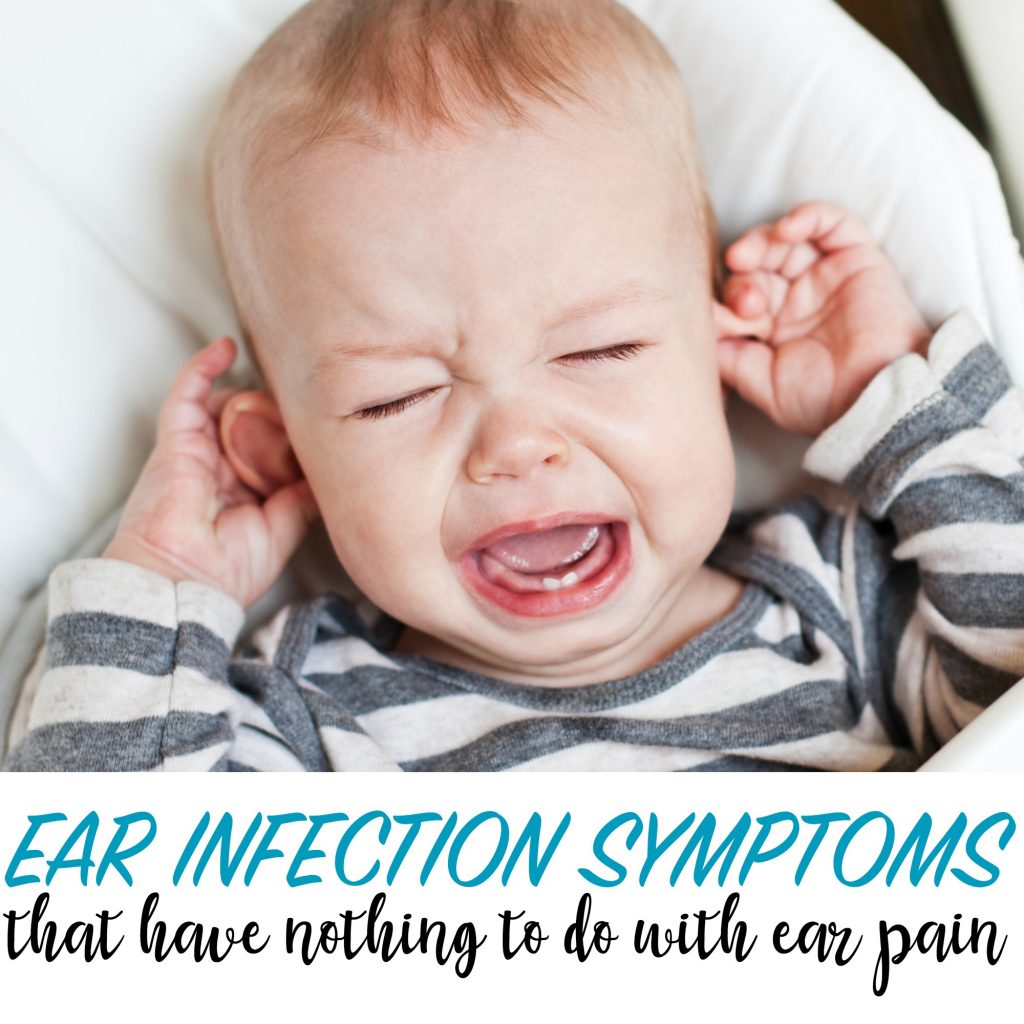 The biggest problem with young children and ear infections though, is knowing when to take them in to the doctor.  When they are very young, or infants, they can’t verbally tell you that they are experiencing ear pain.

So how do you know?  Well, in my experience, you look for the other signs and symptoms of ear infections that really have nothing to do with ear pain.

I had multiple occasions where I knew my children had/were getting ear infections before the doctors could even diagnose it – once I learned the tell tale signs that my babies were giving me!

*DISCLOSURE: I am NOT a medical professional, just a well educated mother of four that’s been there a few times.  I am sharing with you what I have learned but this does

Fever – ear infections are almost always accompanied by a fever.

Rubbing or Pulling on the Ears – babies can’t tell you that their ears hurt but often times you will notice them rubbing or pulling on their ears as a natural instinct when they are hurting them.

Unable to Sleep – the pain that results from an ear infection can be terrible and it is even worse when laying down, making it extremely hard to sleep.  The toddler or baby may be unable to sleep and extremely irritable or crying throughout the night.

Difficulty Hearing – Ear Infections can block the sound going into the ear and there also may be a build up of fluid in the middle ear making it difficult to hear.

Every time one of my children have had an ear infection one thing has been the same – they are absolutely miserable.  If you are paying attention to their temperament, the ear infection symptoms, and their temperature you can follow your instinct and use this information so you know when it’s time to take your child to the doctor.