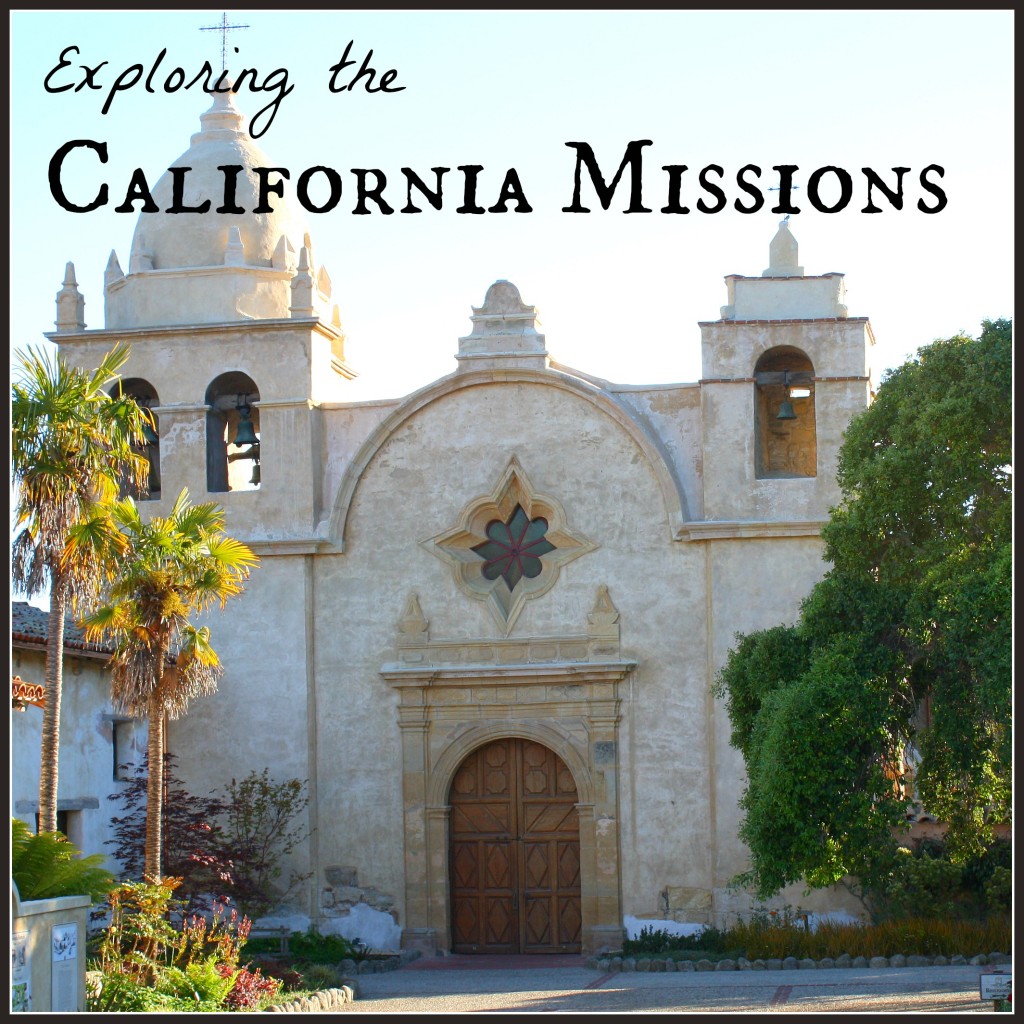 The Missions throughout California played a vital role in California’s history as they stretch from San Diego to San Francisco.  The path between them created what is now known as El Camino Real OR Highway 1 and 101 which stretches 600 miles up the California.  Along the trail you will find 21 Missions, each one established a full days walk from another. 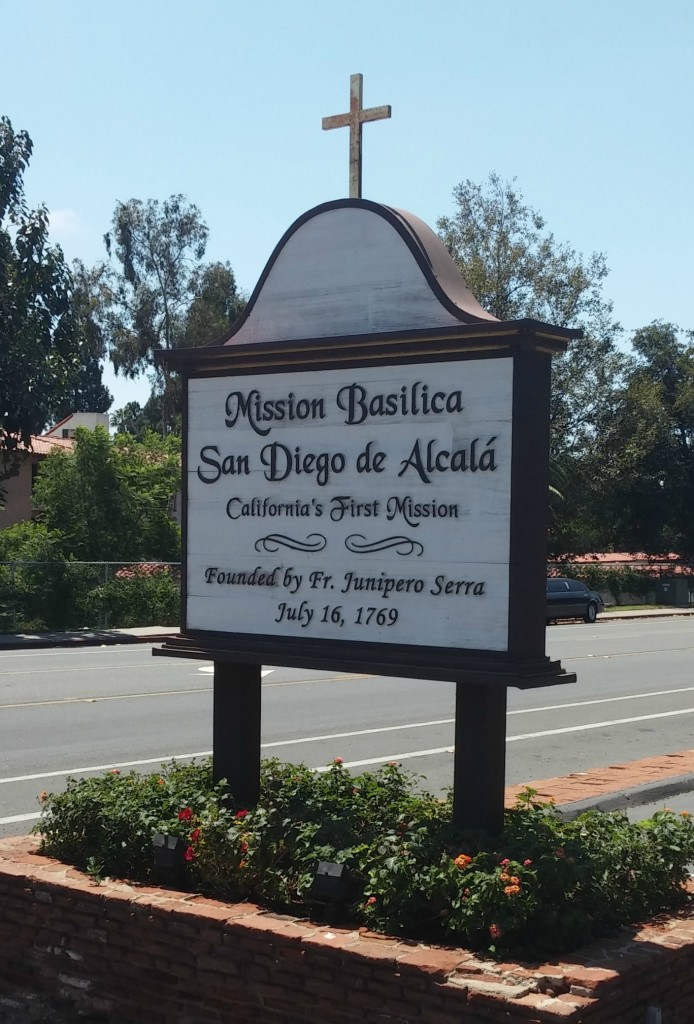 In 1542 the Spanish Expeditions started here in California with Juan Cabrillo.  In 1602, Sebastian Viscaino led a second expedition.  Following the expeditions to what is now San Diego, the King of Spain, Carlos III feared Russians and other foreign powers may pose a threat to the new territories.  Inspector-General Don Jose Galves could lead his soldiers to protect the land but could not win over the Native Americans who lived there.  He enlisted the help of Junipero Serra and the Franciscan Friars to establish the Missions and convert the natives to Christianity, creating loyal subjects of Spain. 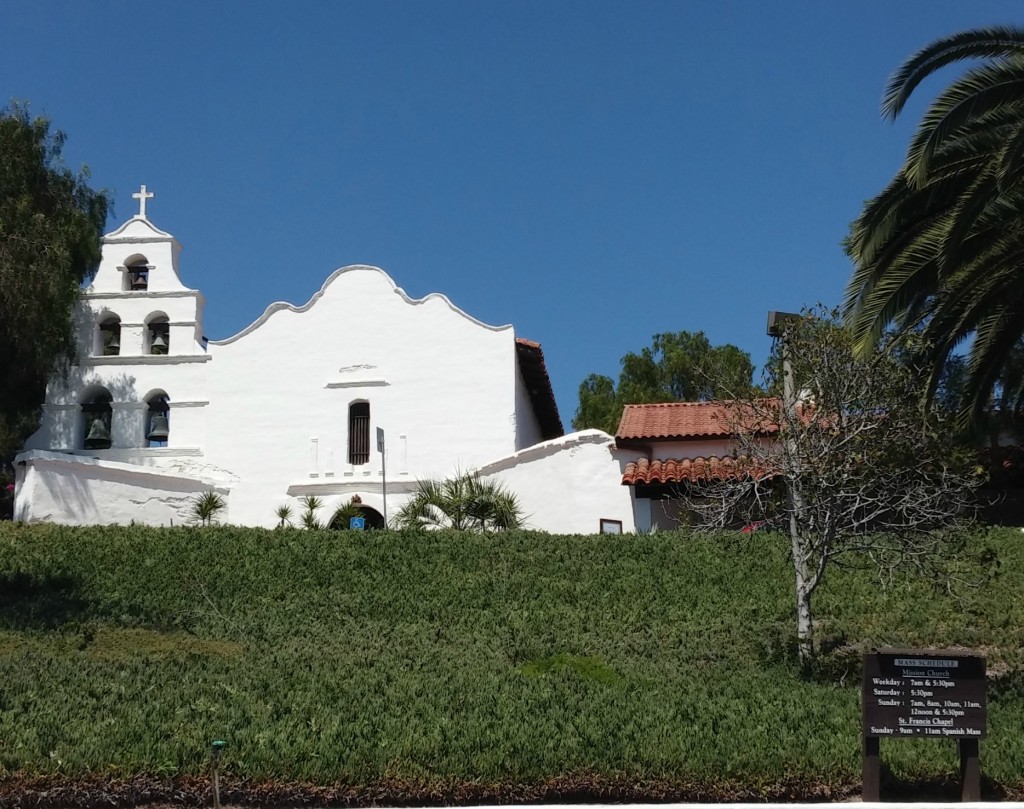 The original Mission was burnt down 1775.  In 1776, Father Junipero Serra returned to San Diego to oversee the rebuilding of the new Mission.  To prevent further attacks they rebuilt the Mission to include 9 ft tall adobe walls, forming a quadrangle.  The mission slowly became efficient and prosperous, breeding horses and mules, growing a large harvest of vegetables and grapes for wine, and converting many of the Natives to Christianity.  Following a drought, they also built a dam and aqueduct across the San Diego River.

In 1821, Mexico gained its independence from Spain and moved to secularize the Missions.  The Missions left control of the Franciscans and the Mexican government took over.  Following the Mexican-American war in 1848, the US Army used the Mission grounds until President Abraham Lincoln signed a proclamation returning 22 acres of the land to the Catholic church.  However, the grounds remained abandoned until 1891 when Father Antonio Dominic Ubach and the Sisters of St. Joseph of Carondalet moved their school for Indian Children to the grounds. The school only remained their until 1907.

Finally, in 1931, the Mission was rebuilt by architects J. E. Loveless and J. Marshall Miller.  They based their revisions off of historical research and rebuilt the Mission to be what it would have looked like in 1815.

WHAT CAN YOU SEE AT MISSION SAN DIEGO DE ALCALA

We had such fun visiting the grounds of Mission San Diego de Alcala.  My children enjoyed learning a bit about their local California and Catholic history.  Last fall, while visiting family in Monterey, we attended Mass at the Carmel Mission.  At the time, to them it was just another church.  After visiting the San Diego Mission, they were very intrigued by the history and to learn of the 21 Missions.  They are excited to research and visit more of the Missions in the future. 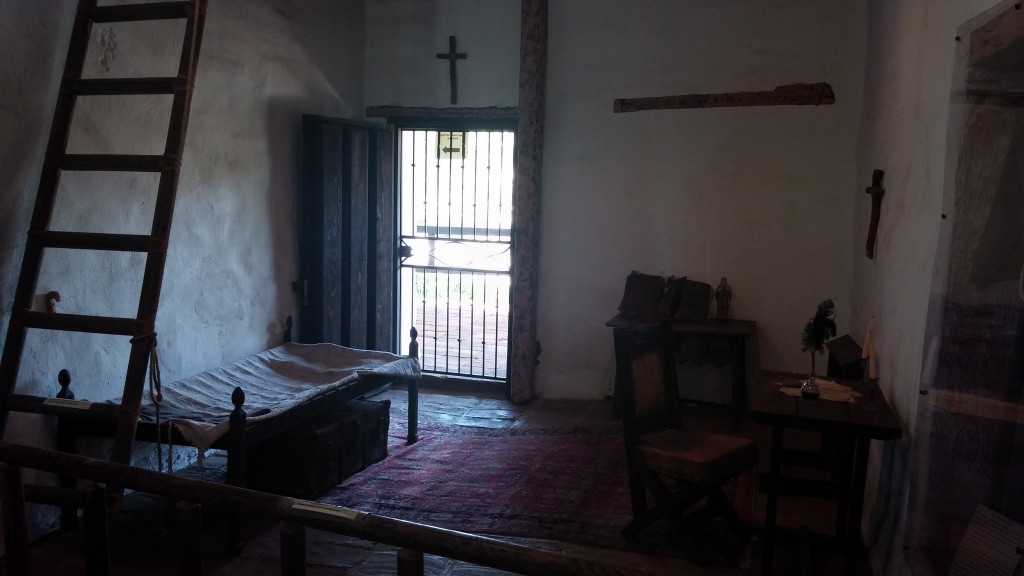 Franciscan Friars are known for the garb shown in the photo below, similar to that worn by St. Francis of Assisi, whom their order is modeled after.  Even todays members of the Franciscan Friars will be seen wearing similar robes. 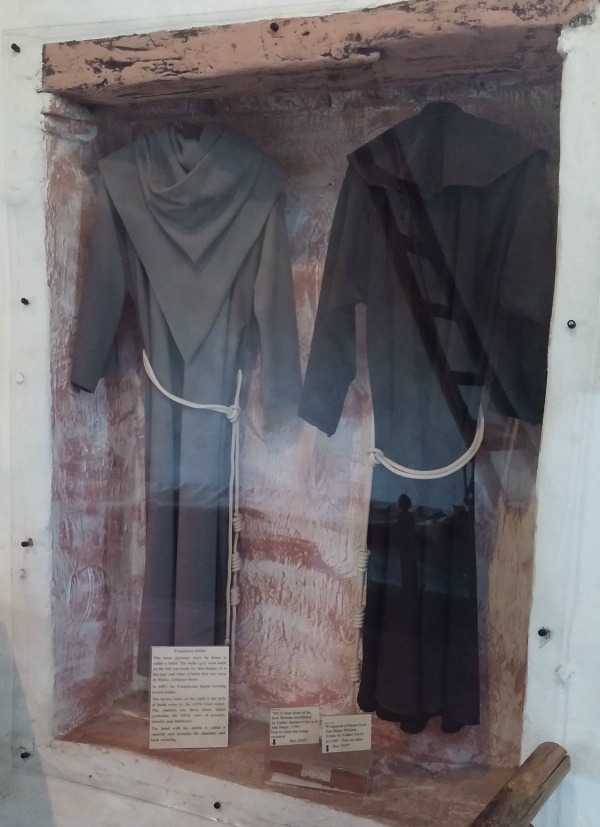 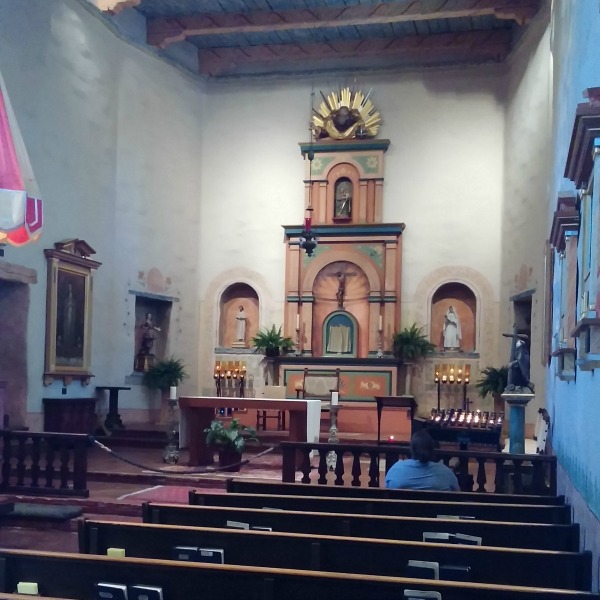 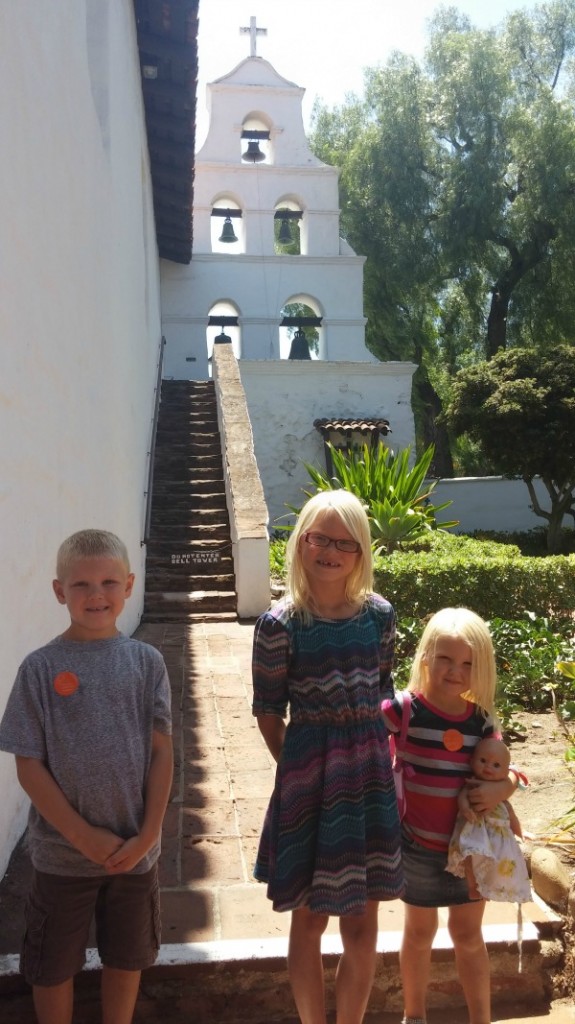 The kids shown standing in front of the Campanario, or Bell Tower. 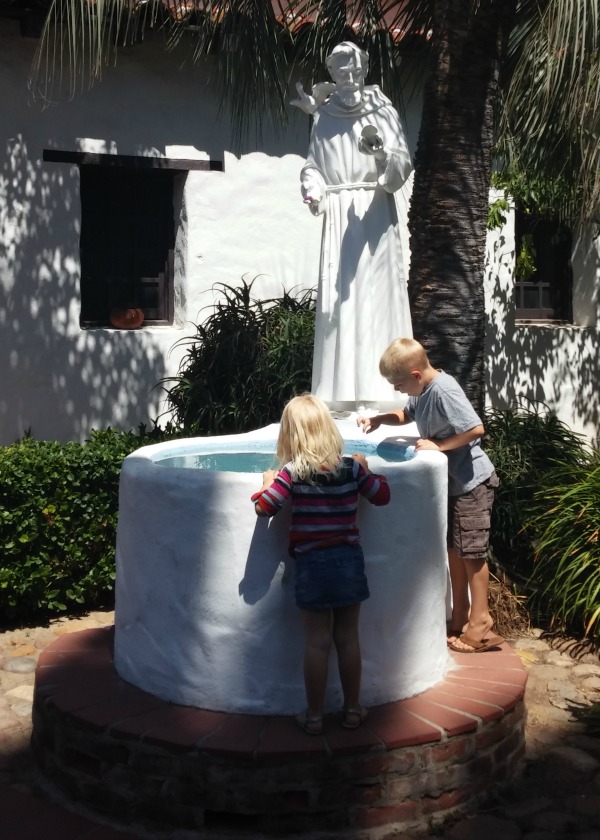 Throughout the garden are beautiful statues and pathways. Here my children are admiring the St. Francis of Assisi Statue and fountain.

St. Francis is my son’s favorite Saint so he really enjoyed it! 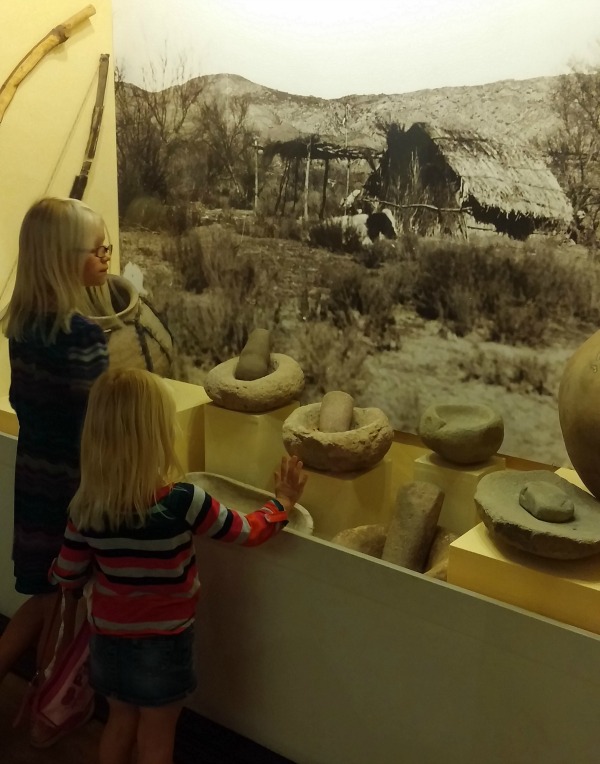 The small museum holds many Native American and Catholic artifacts from the original Mission site.  The top photo shows bowls and jugs used.  The bottom photo is of my youngest daughter admiring a Crucifix, Small Statues, and Monstrance (used to hold the Blessed Sacrament during adoration). 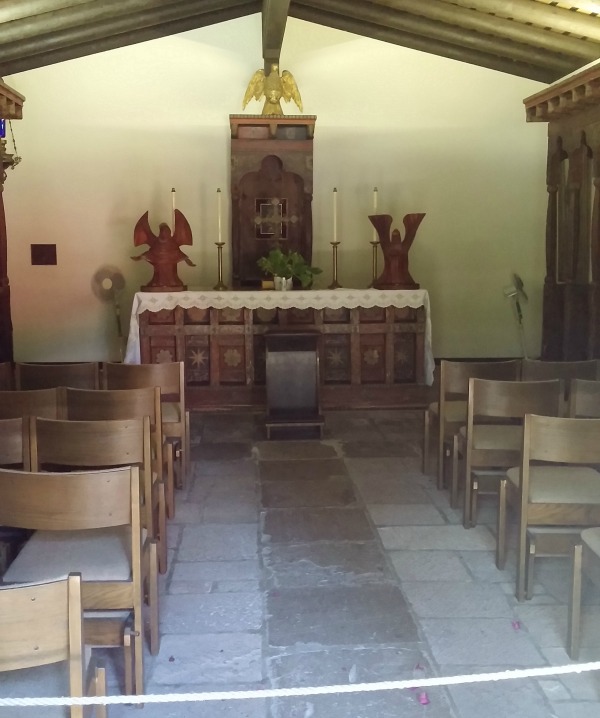 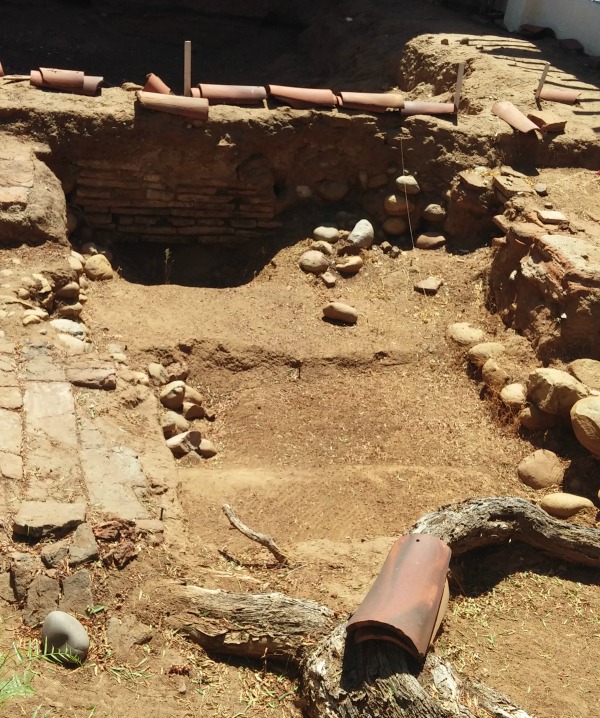 Almost all the artifacts recovered from the site remain at the Mission. 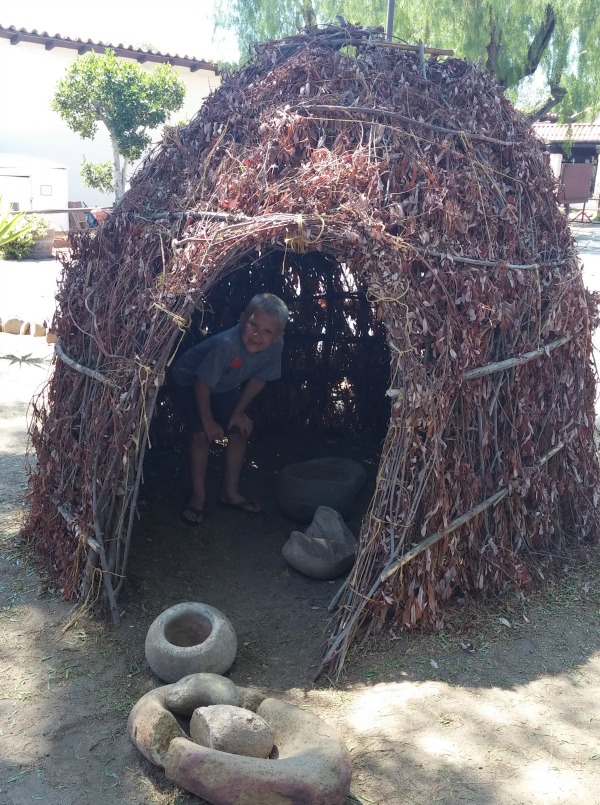 Here my son is posing for a picture in a ‘ewaa.  This is a replication of the types of huts that would have been used by the Kumeyaay before and during Mission times.

You can tour the grounds for a small fee or join the Parish for Sunday Mass.  All information is located on the website.  They also have various events throughout the year, such as the upcoming Taste of the Mission and Oktoberfest.